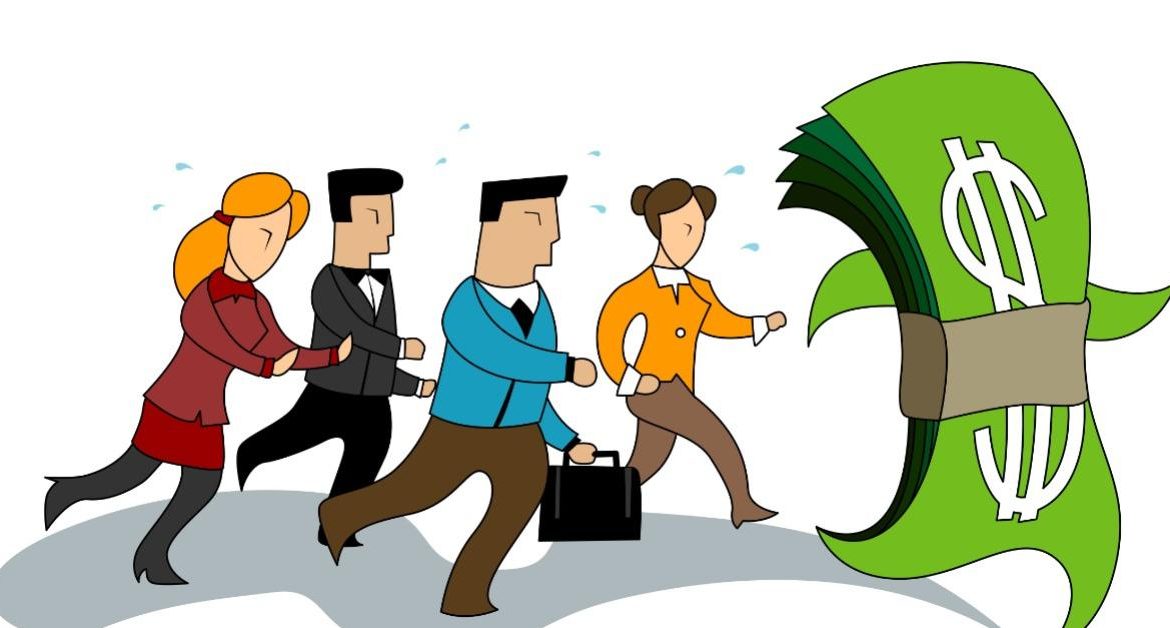 The Velocity of Money Circulation Is Another Economic Myth

A ten-dollar bill, which is circulating with a velocity of three financed thirty-dollar worth of transactions in that year. Now, if there are three billion dollars’ worth of transactions in an economy during a particular year and the average money stock is five hundred million dollars during that year, then each dollar of money is used on average six times during the year. Five hundred million dollars in money by means of a velocity factor has effectively become three billion dollars. This implies that the velocity of money circulation can boost the means of finance.

From this it is established that:

This expression can be also presented as,

Where V stands for velocity, P stands for the average price, T stands for the volume of transactions and M stands for the stock of money. This expression can be further rearranged by multiplying both sides of the equation by M. This in turn will give us the famous equation of exchange

This equation states that money multiplied by velocity equals the value of transactions. Some economists employ GDP instead of P*T thereby concluding that

The equation of exchange appears to offer a wealth of information regarding the state of an economy. For instance, for a given velocity and a given stock of money one can establish the value of GDP. Note that from the equation of exchange a fall in the velocity of money (V) for a given money (M) results in a decline in economic activity as depicted by GDP. Furthermore, information regarding the average price or the price level allows economists to establish the state of the real output.

For most economists the equation of exchange is regarded as a very useful analytical tool. The debates that economists have are predominantly with respect to the stability of the velocity of money circulation. If velocity is stable, then money becomes a very powerful tool in tracking the economy.

Does the Concept of Velocity of Money Circulation Make Sense?

The equation of exchange says that for a given stock of money, an increase in its velocity of circulation helps to finance more transactions than money could have done by itself. However, does it make sense?

Consider the following: a baker John sells ten loaves of bread to a tomato farmer George for ten dollars. John then exchanges that money to buy five kilograms of potatoes from Bob the potato farmer. How did John pay for potatoes? He paid with the bread he produced.

Note that John the baker had financed the purchase of potatoes not with money but with bread. He paid for potatoes with the bread that he produced using money to facilitate the exchange. Money fulfils the role of the medium of exchange, not the means of payment. Ludwig von Mises writes:

The number of times money changed hands has no relevance whatsoever on the bakers’ ability to fund the purchase of potatoes. What matters here is that he possesses bread that serves as the means of payment for potatoes.

Being the medium of the exchange, money does not circulate; it always belongs to somebody and is always someone’s property. According to Mises:

There is no fraction of time in between in which the money is not a part of an individual’s or a firm’s cash holding, but just in circulation. It is unsound to distinguish between circulating and idle money.

Money can be in the process of transportation, it can travel in trains, ships, or planes from one place to another. But it is in this case, too, always subject to somebody’s control, is somebody’s property.

The Velocity of Money Circulation and Goods Prices

Does the velocity of money circulation have anything to do with the prices of goods? Prices are the outcome of individuals’ purposeful actions.

By entering an exchange, both John and Bob are able to realize their goals and promote their respective well-being. John concluded that it is a good deal to exchange ten loaves of bread for ten dollars for it will enable him to procure five kilograms of potatoes. Likewise, Bob had concluded that the ten dollars for his five kilograms of potatoes is a good price, for it will enable him to secure the ten kilograms of sugar.

Observe that price is the outcome of different ends, and hence the different importance that both parties to a trade assign to means. The fact that so-called velocity is three or any other number has nothing to do with goods prices and the purchasing power of money as such. Individual’s purposeful actions determine the prices of goods and not velocity.

The Velocity of Money Circulation Does Not Exist Independently

Contrary to mainstream economics velocity is not an independent entity—it is always the value of transactions P*T divided into money M—i.e., P*T/M. According to Murray N. Rothbard:

But it is absurd to dignify any quantity with a place in an equation unless it can be defined independently of the other terms in the equation.

Given that V is P*T/M, it follows that the equation of exchange becomes M*(P*T)/M = P*T, which is reduced to P*T = P*T, and this is not a very interesting truism. It is like stating that $10 = $10, conveying no new knowledge of economic facts.

Additionally, does a so-called unstable velocity of money circulation imply an unstable demand for money? The fact that people change their demand for money does not imply instability. Because of changes in an individual’s goals, he may decide that at present it is to his benefit to hold less money. Sometime in the future, he might decide that raising his demand for money would serve better his goals. So what could possibly be wrong with this? The same thing that goes for any other goods and services—demand for them changes all the time.

Contrary to popular thinking, money does not circulate. Instead, it always belongs to somebody.