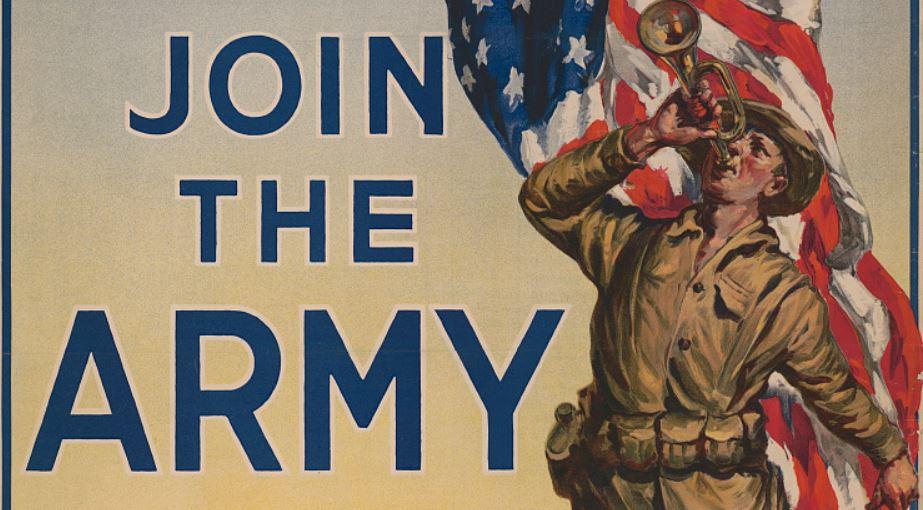 The US Army reports it is having some serious problems when it comes to recruiting new soldiers. Last month, according to the AP: “Army officials … said the service will fall about 10,000 soldiers short of its planned end strength for this fiscal year, and prospects for next year are grimmer.”

The army is not alone in missing recruitment goals:

Senior Air Force, Navy and Marine Corps leaders have said they are hopeful they will meet or just slightly miss their recruiting goals for this year. But they said they will have to dip into their pool of delayed entry applicants, which will put them behind as they begin the next recruiting year.

In fact, recruitment prospects are so grim, 2022 is looking to be the worst recruiting year for the army since 1973 when the US military transitioned to an all-volunteer—i.e., nonconscripted—force. The days of the post-9/11 surge in enlistments is long gone, and the US military faces a new environment in which the US military has become notable in recent years for two lost wars and declining support from the public. Moreover, with its recent drive to showcase its commitment to so-called woke policy goals, the military may be alienating conservatives—a group that has long been a reliable source for recruits and political support.

Ultimately, of course, the military can always get more troops by raising pay and lowering standards. The latter requires only a policy change. And, given the federal government’s ability to essentially print money, the former is unlikely to be an insurmountable problem for the Pentagon either.

The Economics of Recruitment

As has often been the case in the past, the military is now struggling to find enough willing recruits in an environment of low unemployment. After all, many recruits are motivated at least in part by promises of steady income, veterans’ benefits, and tuition reimbursement. These benefits look relatively less attractive when private-sector jobs are easy to find.

As a result, the military has been “throwing cash” at the problem. All the services are now “leaning on record-level enlistment and retention bonuses” to attract enlistments, with higher bonuses for riskier or more skill-intensive work.

Military recruiting efforts, however, have long sought to “subsidize” the salary with promising psychic profits in the form of positive emotions obtained by fulfilling one’s supposed patriotic duty. Another benefit suggested by recruiters has been an alleged opportunity for “adventure.” Historically, recruitment efforts have relied on promising a variety of nonmonetary forms of “payment.”

In their analysis of military recruitment efforts, Peter Padilla and Mary Riege Laner identified at least four different types of benefits promised to potential recruits. These include patriotism, adventure/challenge, job/career/education, social status, and money. Emphasis has differed based on larger social trends (such as the prevalence of antiwar sentiment) and, of course, on the personal preferences of individual recruits.

The military in any case has recognized the need to appeal to all these aspects to meet recruitment goals. Even when military pay is generous, it is still necessary to get potential recruits to accept a job in which one cannot legally quit the job. Moreover, if a large number of potential recruits view the military as pursuing values and goals contrary to those of the recruits themselves, monetary rewards would have to be raised quite high to overcome nonmonetary concerns.

Another strategy that can increase recruitment is to lower (or change) standards for new recruits. This has often been used in various ways. For example, as tattoos has become more fashionable among middle class youth, the military has granted many more waivers. The Air Force is now considering allowing members to grow beards. These changes, however are based largely on appearance. More broad changes that would qualify as truly lowering standards include efforts to lower physical fitness requirements for women and older members, and for marijuana users. For more than a decade now, the Army has also been accepting more and more recruits with lower scores on aptitude tests and with no high school diploma.

Of course, there is no “correct” number of employees in the armed forces, and there is no functioning marketplace in the provision of “defense.” The size of the US military is arbitrarily determined by Congress and the White House based on political interests and goals. The military is nonetheless partly constrained by market realities in the private sector, and by the subjective values of potential workers.

Support for the Military Is Falling

All else being equal however, this is evidence that workers are less interested in serving in the military outside mere economic considerations. This is reflected in the survey data suggesting that the military’s reputation among members of the general public has declined significantly.

For example, as the Military Times reported last year, “About 56 percent of Americans surveyed said they have ‘a great deal of trust and confidence’ in the military, down from 70 percent in 2018.” Moreover, according to Gallup, the percentage of Americans who believe that military officers “have high ethics” dropped ten percent from 2017 to 2021.

As has long been the case, the military remains among the more trusted institutions in the US, but, as even the relentless promilitary Heritage Foundation admits:

A more candid appraisal, however, would see this for what it is: a vote of declining confidence by America in its oldest and heretofore most trusted institution.

More worrisome still—from the Pentagon’s perspective—is that much of this decline is coming from a drop in support from conservatives and Republicans. Gallup reports that in its survey, military officers’ “image among the GOP is now the lowest Gallup has recorded since the first reading, in 2002, a period spanning Republican and Democratic presidencies.”

Moreover, political rhetoric among many conservatives has decidedly turned against the Pentagon. This was noted last year in Foreign Policy:

The long Republican romance with the military appears to have finally come to an end. And as conservative politicians and pundits have put the U.S. military—and especially the top brass—in their cross hairs, their supporters and listeners have taken note. The consequences for the U.S. military could be dire.

Most of the generals we see quoted in the press seem more committed to meeting some counterproductive diversity goal—hiring more pregnant Air Force pilots, assembling the world’s first transgender SEAL team—than on defending the United States.

The Effect on Enlistments

These trends among historical supporters of the military may be finally showing up in recruitment realities. It’s difficult to directly measure the ideological leanings of new recruits. After all, enlistment forms don’t ask for one’s political and ideological beliefs. But we can indirectly make some guesses about who is joining the military based on where most of the recruits are coming from. For example, as the New York Times reported in 2018, military recruiters rely heavily on new recruits from the nation’s most politically conservative region—the South—to meet recruiting goals:

In 2019, Fayetteville, N.C., which is home to Fort Bragg, provided more than twice as many military enlistment contracts as Manhattan, even though Manhattan has eight times as many people. Many of the new contracts in Fayetteville were soldiers signing up for second and third enlistments…. Military service was once spread fairly evenly—at least geographically—throughout the nation because of the draft. But after the draft ended in 1973, enlistments shifted steadily south of the Mason-Dixon line. The military’s decision to close many bases in Northern states where long winters limited training only hastened the trend.

The significance of geography for new recruits can also be seen in the fact that conservatively political regions also tend to grant military recruiters better access to local schools. As school districts in many left-leaning urban areas have been restricting access to high school students in recent years, this has further increased the reliance on recruits from promilitary suburbs, exurbs, and rural towns. These are areas that tend to be more politically conservative. Moreover, new recruits lopsidedly come from families with a history of military service. While the extent to which military personnel support Republicans has been overstated, the military does nonetheless lean conservative. All this would therefore suggest that new recruits come both from households and regions that lean conservative themselves.

In other words, the military has becoming increasingly reliant on a dwindling number of communities and families. The military brass admits this model is not sustainable.

The larger issue here is not whether or not the military can meet recruitment goals without big changes to current standards and pay. After all, if the economy continues to weaken and unemployment rises, this could bail out recruiters in a big way. Rather, the enlistment situation helps to illustrate what may be a developing and hopeful trend in which many conservatives may finally be abandoning their long love affair with the US regime through its military institutions.