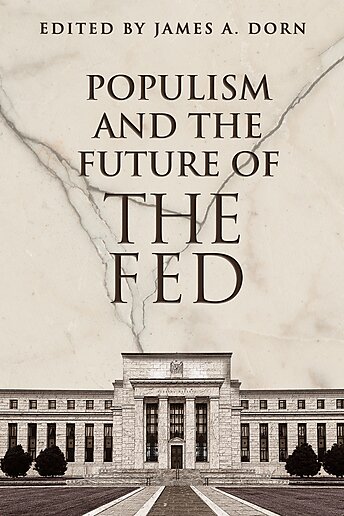 Populism and the Future of the Fed: A New Book from Cato’s Center for Monetary and Financial Alternatives The distinguished contributors to Populism and the Future of the Fed examine populist demands to expand the Fed’s mandate and the threat to the demarcation between fiscal and monetary policy.  All the essays, except those by Charles Plosser and me, stem from Cato’s 39th Annual Monetary Conference, which took place virtually on November 18, 2021.

The 2008 financial crisis and the COVID-19 pandemic have greatly expanded the Fed’s scope and power. As the bright line between monetary and fiscal policy fades, and the threat of fiscal dominance increases, a robust discussion of the Fed’s future is warranted.

This volume features highly readable essays that provide a broad perspective on core issues—including the populist challenge to Fed independence, fiscal dominance and the return of inflation, the limits of Fed power versus the expansion of its dual mandate, the strange world of helicopter money, and fiscal QE (i.e., using the Fed’s balance sheet to support off-budget spending).

One could argue that those who want the Fed to allocate credit, help fund a Green New Deal, engage in helicopter drops, and so on, are well intentioned.  However, the real issue is whether such actions are consistent with long-run price stability and the rule of law.

Thus, several questions come to mind: (1) What are the limits to what the Fed can do and what it should do in a free society? (2) Where do we draw the line between fiscal and monetary policy? (3) Do we want an activist central bank with wide discretion or a limited central bank guided by a monetary rule? (4) What are the risks populism poses for the conduct of monetary policy, Fed independence, and central bank credibility? (5) Can the Fed control inflation if populism and fiscal QE become pervasive?

The trademark of this book, as Jeb Hensarling, former chairman of the House Financial Services Committee, noted, is that it “brings together some of the greatest thought leaders and monetary policy scholars to examine exactly how the Fed is being politicized and what that means for our economy.”

In the lead chapter, Raghuram Rajan, a professor of finance at the University of Chicago’s Booth School, observes:

The authors in this volume avoid jargon and seek to address fundamental issues surrounding monetary policy in a clear and compelling manner that will help improve both policymakers’ and the public’s understanding of the complex relationship between politics, policy, and the rule of law. Moreover, they provide different perspectives—legal, philosophical, historical, theoretical, and ethical—in reflecting on the role of the central bank in a democracy.

John B. Taylor, a professor of economics at Stanford University, described the book by saying:

These beautifully written, jargon-free essays provide a much-needed and careful assessment of the Fed’s future following the 2008 financial crisis and COVID-19. Both events created populist demands for a host of new discretionary actions. The challenge is to restore a Fed with more limited power that follows well-understood rules and procedures.

Now, more than ever, it is important to understand the implications and consequences of populist policy if the country is to achieve monetary stability and long-run prosperity.  As Sir Paul Tucker, author of Unelected Power: The Quest for Legitimacy in Central Banking and the Regulatory State, noted in recommending Populism and the Future of the Fed:

Populism, whether left or right, is short-termist. Central banking is about the long-term economic and political benefits of monetary system stability. Read this book to help make sense of the Fed’s wobbles.

The recent—and largely unexpected rise in inflation—has shown beyond a doubt that central bankers are not omnipotent.  It may be true that, “Like Ulysses at the mast, political authorities can resist the inflationary sirens under a delegated depoliticized monetary policy,” as Charles Goodhart, a former member of the Bank of England’s Monetary Policy Committee, and Rose María Lastra, the Sir John Lubbock Chair in Banking Law at the Centre for Commercial Law Studies, Queen Mary University of London, point out in their chapter.  However, a nagging question remains—namely, “How does one reconcile this model with the new political realities?” This volume will help shed light on that fundamental issue.

The post Populism and the Future of the Fed: A New Book from Cato’s Center for Monetary and Financial Alternatives appeared first on Alt-M.