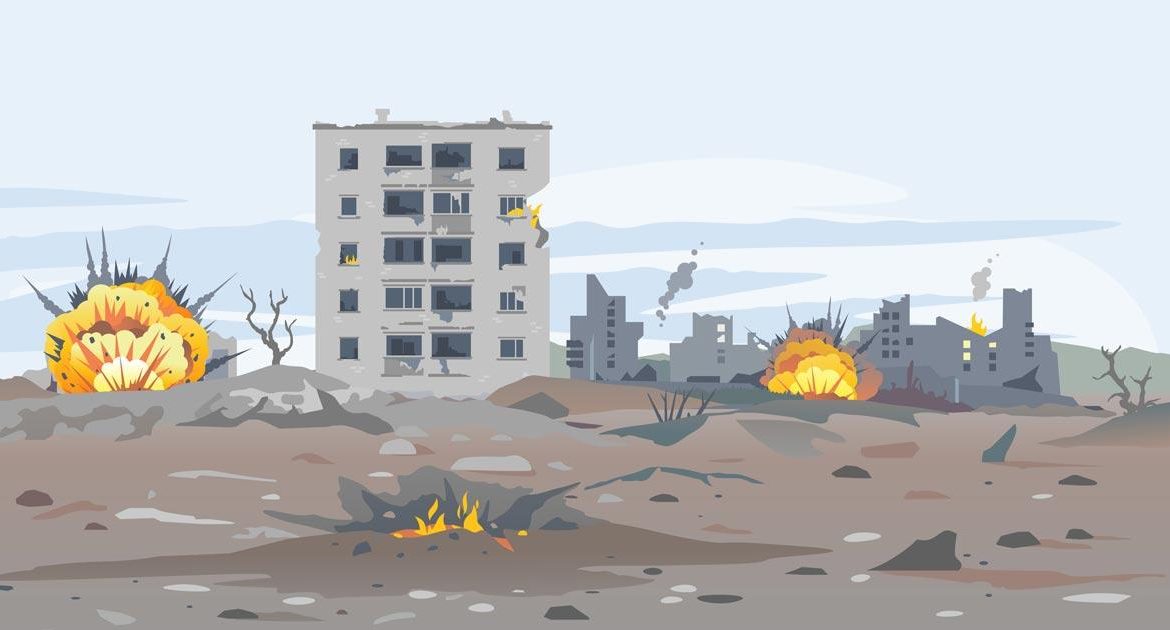 The triumph of peace in contemporary societies is expressed as an obvious fact by mainstream intellectuals. Noting the relatively peaceful state of the world is part of a broader narrative to paint a positive picture of humanity. Yet there is a kernel truth to the assertion that quality of life indicators are improving, as explored by Marian Tupy and other optimists. But the game of warfare is more complicated.

Steven Pinker in his compelling tome The Better Angels of Our Nature posits that warfare is declining. Numerous graphs and statistics are adduced to marshal his case for the ascent of peace. But since its publication in 2011, Pinker’s thesis has spurred internecine debates. But before embarking upon an exploration of Pinker’s audacious claim, we must assess the right variables.

Pinker’s most crucial point is that interstate warfare is declining on a global scale. But for philosopher John Gray this observation warrants critical scrutiny. Gray in a scathing review offers a scorching critique: “If great powers have avoided direct armed conflict, they have fought one another in proxy wars.” Gray lists several examples covering Western interventions in Asia and Africa; however, critics employing this line of reasoning are mistaken in their analyses.

At the heart of the debate is the scalability of wars, so yes, Western countries engage in proxy wars, though the potential of such wars to induce global warfare is a separate issue. Moreover, the contention that insurgent groups are a threat to peace is a valid point, yet these entities lack the capabilities to conduct warfare on a grand scale and neither are they interested in doing so. Essentially, insurgent groups pursue parochial or regional political and economic goals.

Although, Gray’s consideration does not undercut Pinker’s thesis, the propensity of rogue actors to potentiate conflict in the developing world must be dissected. Reviewing Pinker, Michael Mann writes: “War has not declined and current trends are slightly in the opposite direction…. Viewed from the South the view has been bleaker both in the colonial period and today. Globally, war and violence are not declining but they are being transformed.”

Upon closer introspection, it appears that Pinker and his critics can achieve a middle ground, because both viewpoints are partially accurate. In fact, Pinker should revisit his thesis to incorporate a cognitive theory explaining the decline of violence in Western societies. The civilizing ethos of the Enlightenment is a prominent fixture in his book, so implicitly the argument being enunciated is that the West has become more harmonious despite the rise of violence in other places. Pinker has the intellectual fortitude to present such a case; however, this venture would require him to draw on evidence in comparative sociology, genetics, and intelligence research. Unfortunately, doing so in this riotous political climate would earn him the ire of our procrustean intelligentsia. Hence approaching the issue using a cost-benefit analysis framework, Pinker may conclude that research of this nature is not worth the reputational risk.

Nevertheless, the evidence purports that violence in the developing world seems to be driving the numbers. Commenting on the state of warfare in 2016, Max Roser notes: “The number of ongoing conflicts each year has risen. This increase, however, only relates to civil conflicts within states. Conflicts between states have almost ceased to exist.” On average civil conflicts are more prevalent in developing regions, so we cannot discount the reality, that bleak numbers are attributable to tensions in developing countries.

Roser’s analysis is bolstered by Aaron Clauset, who submits that “conflicts in other parts of the world most notably, Africa, the Middle East, and SouthEast Asia, have become more common, and these may have statistically balanced the books globally, against the decrease in frequency in the West.” In contrast, Michael Spagat and Stijn van Weezel in a 2019 paper depict a more sanguine picture by demonstrating that the chances of waging a truly huge war are lower now than they were in the nineteenth and the first half of the twentieth century.

Some use the results of Spagat and Weezel as evidence that war is declining, when the conclusion is really articulating that the benefits of peace exceed the costs of wars for countries with the best abilities to wage wars. More broadly, the essence of this conclusion is that global warfare is becoming less likely, because war is a liability for rich countries. Interestingly, in a separate study, Weezel concludes that “the period after the Second World War does indeed seem to be relatively less belligerent in terms of adjusted fatality numbers.”

Lower fatalities in warfare could be a function of several variables ranging from better medicine to the application of ethical principles. Additionally, analyzing fatalities on a per capita basis for civil wars in developing regions would aptly position researchers to gauge the extent to which wars have become less vicious. Another possible reason for the decline in turbulent wars is that none of the powers with real capacity to unleash terror have been involved in a major war with an equivalent power since 1945. The Cold War was an ideological conflict and as such should not be conflated with interstate wars.

So far, we have focused on critics suggesting that wars are not declining, and now we will addressed those contending that the “long peace” is a result of long-term statistical patterns. That the long peace is indicative of long-term trends is a plausible assumption. However, it could also be a consequence of divergent developments in the West. The precipitous decline in violence is concretely understood as mainly a Western event, with pockets of success in Asia. Hence like the Industrial Revolution, this may be another arena in which the West first diverged from the rest of the world.

Invariably, the studies perused in this discussion are compelling, but to enhance our understanding of the issue, researchers should deeply interrogate the fatalities of civil wars and the causes of violence in the developing world. Pinker is confident that the long peace is not a fluke, although little evidence indicates that it holds for the developing world. Clearly, the real question to be posed is why violence has declined in the West, but not elsewhere.